REVIEW – The Reactivitz ‘The Uncertainty of Tomorrow’ (Immersion) 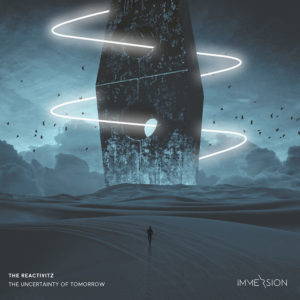 The Reactivitz has for many years been one of France’s most hyped techno artists alongside others such as the Cosmic Boys and Popof.

Lockdown has put the world’s music industry on pause and individual DJs and producers decided to spend that time differently. The Reactivitz is someone who used the time to get busy in the studio, and produce a much-anticipated debut album.

Titled The Uncertainty of Tomorrow, the album’s inspiration came from the uncertainty of the pandemic, and the changes that have come about as a result of it. The tension that runs through the twelve tracks is aimed to emulate the frustration of closure and anticipation of reconnecting.

Released on The Reactivitz’s own label Immersion, the release was lovingly curated and perfected through lockdown, and is being released as a celebration of what feels like the end of an ominous situation.

“The Past Is Gone” opens the release with a title that acknowledges that some things may never be the same again, and the music builds suspense with strings and booming bass textures. “Nothing In My Mind” is the first of the main tracks with its four-to-the-floor kick drum rhythms and delivers a driving energy over soulful vocals and poignant pianos chords. The tracks say farewell to a pre-pandemic world that will be sorely missed.

From the third track onwards, the album builds a steady momentum and it’s captivating like a DJ set, but with expert programming that helps the tracks flow together while also being separated into individual bits of music.

“Oracle” is an uplifting interlude that breaks down the energy with a change of pace before the upwards trajectory continues towards the “Full of Hope” outro that signifies the positive beginnings of a post pandemic world.

If people are familiar with The Reactivitz tracks on labels like Octopus, 1605 or Set About, then the album doesn’t disappoint while also showing some of the different layers to his sound that allow fans to see beyond what’s on the surface.