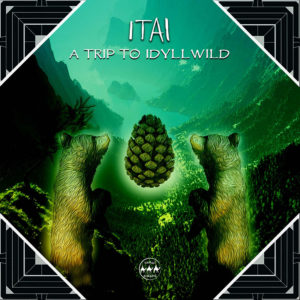 Based in America, ITAI is still a relatively new artist in terms of his electronic music releases, but already he has many great achievements under his belt. He regularly performs on Blond:ish’s Twitch channel Abracadabra, and his music can be found on other labels such as LNDKHN and Exotic Refreshmen.

His electronic music style is downtempo with lots of organic textures and live instrumentation. The rhythms and melodies seem to have a world music influence, and explore the cultural folk law of countries from around the world. Mixing those influences with sequenced drums, he has a magical sound that transports the listener to other far-off lands.

The eight-track album is called A Trip To Idyll Wild and opens with a moody intro that sets the scene with some haunting saxophone tones and spare drums layered with a throbbing sub bass. Moving into the main part of the album comes the chugging groove of “Flame of the Pine Cone”, which is followed by the rather quirky “Curiosity Bear”.

Curiosity Bear is a jazz rework of a children’s nursery rhyme, and it’s a rather fascinating piece of electronica. The next couple of tracks “Latin Idea” and “Jacob’s Ladder” both follow a similar song template with low slung grooves built around a saxophone lead.

“This Is The Way” switches things up a bit, as it’s a trippy track that focuses on atmospheric suspense, and uses more electronic sounds rather than focus on a saxophone. “Wancy” reintroduces the saxophone and layers it over a rather spectacular backing track that’s laid-back style soothes the soul. Lifting the tempo for the finish, “Darkness” closes out the release with some poignant piano chords and fast-flowing percussion.

On a whole, a very well produced and put together album that’s well suited to home listening, and also the DJ sets of those who play a more downtempo style.