Lovefest, Serbia is one of Europe’s most celebrated festivals and this year will be held from 4th till 6th of August under the slogan Refresh. This year’s edition marks 15 years and it will be the biggest in its history with legends of the electronic scene such as Marco Carola, Joseph Capriati, Jamie Jones, Kölsch, Rødhåd, Folamour, Danny Tenaglia, and more than 100 other performers. For all international visitors Lovefest have put together a special discount package. Regular, VIP and Backstage tickets can be purchased at https://tibbaa.com/order/xlfkcklmru?lang=en.

Five music stages and a spectacular closing on the Fire Stage

This year, in the renowned park of Vrnjacka Banja, DJs will perform on five music stages. On the biggest stage, the globally revered Kollektiv Turmstrasse will play live on the first day of the festival. Marco Carola, Jamie Jones, Joseph Capriati and William Djoko will all return to Lovefest, alongside a debut for Danny Tenaglia. Joining them are the much-hyped Frenchman Folamour, melodic techno maestro Kölsch, as well as minimal favourites Sonja Moonear and Archie Hamilton. The jubilee edition of Lovefest will also play host to a spectacular ending, comprising a prodigious three-hour back-to-back closing set on the legendary Fire Stage.

For the diggers, the Energy Stage will host Antal, owner of the legendary label and store Rush Hour, plus Rødhåd, DVS1, Mendel, Rick Wilhite, Paquita Gordon, Esa, Zenker Brothers, Zernel, and Lauren Hansom. In celebration of the 15th anniversary, the last morning will be soundtracked by legend Joe Claussell.

This year is special in that Lovefest will celebrate 15 years of producing the highest quality entertainment, as well as numerous accompanying programmes and projects, and thus mark a spectacular jubilee. During the last decade-and-a-half, Lovefest has played host to more than 800,000 rev and over 4,000 performers from all over the globe. 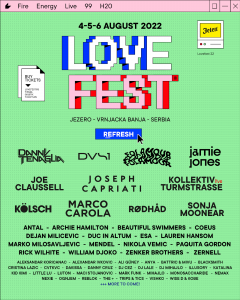